Posted on January 28, 2013 by nadiaschooldays

We went to Tucson last week, tagging along with hubs for his conference. This time, for Z’s food, I asked hubs to just ask for a fridge in the room and so I just cooked food as I would if we were eating at home, froze them in small ziplocs and we brought our cooler and I put them in insulated lunch bags. By the time we reached the hotel room, they were still frozen so I just transferred them to the fridge. The ones in the insulated lunch bag stayed frozen the longest (since the fridge doesn’t have a freezer section). Hubs even asked for a microwave, which we used to heat up leftovers of Chef Alisah’s delicious food!

We drove there Monday after S is done with her TQ class, and dropped by Whole Food for greens before going to the hotel. On Tuesday, all of us except the girls went to the pool, and they slid on the 180 feet water slide. S had her TQ and N didn’t want to come. That evening, we all went to this Bosnian restaurant, and it was our first time (not hubs) eating Bosnian food. It was a LOT of meat for us. It was supposed to be for 4, but for us carb-eating Malays, that was too much meat, so we took them home and put them in the fridge and they lasted us for the rest of our meals till we left on Thursday! Alhamdulillah. It was delicious though, the chicken was moist and flavorful and the meat, delish! For Z, we heated up his pasta and brought it with us and he ate it before our food reached the table.

S in her TQ class. It was nice to hear her class even while we’re traveling. And mine too! And this time, Nouman too! 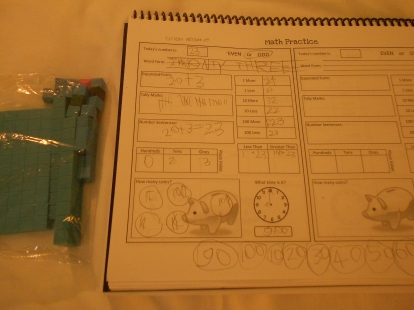 I had brought along Z’s calendar notebook but only did it with him on one of the days, because by sticking to our regular schedule and taking them swimming and I had to make up my missed class on Thursday, it left little time for me to work with him. But at least we got something done, alhamdulillah. I foresaw January as being very tight for me, so whatever I am able to get done, I am grateful for, alhamdulillah. 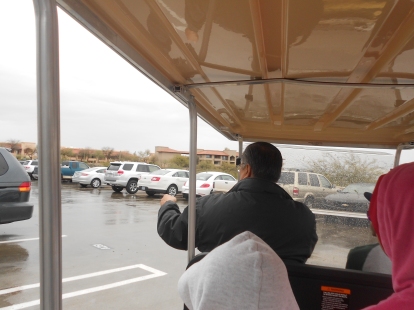 Z loved getting on this golf cart. We were transported by it the night we arrived and the day we were checking out(since it was raining then).

On Wednesday, because I had class, hubs took the kids hiking in the late afternoon. I was left alone in the room attending my class. That morning, all the kids had classes, for N, throughout the morning, from 7 – 11 am. We still stuck with our Tafseer and Arabic With Husna routine throughout the stay in Tucson alhamdulillah. Though on Wednesday we weren’t able to finish watching CNNStudentNews. 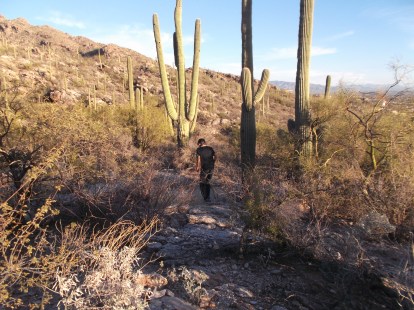 We don’t have any saguaros in New Mexico, so you will only see these in Arizona.

On Wednesday and Thursdays, I took H and Z swimming and alhamdulillah, using the noodles, 3 of them wrapped around him front and back, Z used his feet and arms and swam a lot with H. H is able to swim pretty well from what I am able to assess, alhamdulillah. Z is still a little scared, though he could stand in the pool with his head above water, he refused and relied completely on the noodles keeping him afloat. But at least he swam a lot, and I hope it helps in making his upper body stronger as that is the focus in his occupational therapy.

Now it’s back to work. Last night, the girls were asked to fill in for a sick teacher for Sunday school and today, both S and N went to the masjid to fill in as Islamic studies teachers. While S was preparing for it last night, she showed be the book they are using, and in it, it says that the fruits that Zakariya a.s. found with Maryam a.s. were brought in by the people and that when she said, “This is from Allah,” she meant that it was a blessing of Allah that those people brought her those fruits. This is the first time we heard of this interpretation, so it became a bit of an issue, and eventually we decided that it is best that when she does this passage with the students, that she inform them that based on what she is aware of, this is not the case. So on Saturday, all 3 kids went to volunteer at the soup kitchen, and today, the girls went to teach at Sunday school. They said the students were pretty well behaved alhamdulillah and listened to them! One of our concerns of having S teach was that they might not listen to her because some of the older ones would be close to her in age, but alhamdulillah they listened. And in Tajweed class, where an older Saudi sister is teaching, S was suddenly asked to translate ayatul kursi in English to the students, and alhamdulillah, as S had already done it in TQ, she was able to do that. Subhanallah, a blessing from Allah. To be able to read from the mushaf and translate it. Alhamdulilah, Allahu Akbar! It’s an indescribable feeling! Alhamdulillah Alhamdulillah!

So alhamdulillah, it’s a productive weekend for the kids. H spent time playing basketball tonight with a boy, which is part of an effort to have my friend’s kids to like coming to the masjid inshaaAllah. May Allah bless the effort and give the taufeeq for our youth to be attached to the masjid. Ameen.