Posted on September 6, 2013 by nadiaschooldays

Last week, Z had an eye exam. Turns out he has astigmatism. But oh boy, did he NOT cooperate during the exam. He only cooperated well when I promised him ice cream at home if he would do what they’re telling him to do. But we didn’t get glasses though. Doc said even if he wears them, he wouldn’t be wearing them all the time. She dilated his eyes and said that it would be make him a bit sleepy but when he was still playing around with the seat, she said to me, “I thought it would make him calmer.” No it didn’t. He did get a kick out of wearing the temporary shades back home though. I did notice him rubbing his eyes a lot though. She did say he has dry eyes, so Flaxseed for all of us I guess.

Monday was Labor Day but we got some work done. We did the Calendar Notebook and then he chose to do his Math workbook. Then, because we were going to the outlet to buy some shoes, I left him to work on it on his own. When we got back home after the outlet, he resumed his workbook again. He seems to enjoy doing the addition. I keep saying to him,

“MashaaAllah, keep working on it and then you’ll be so fast with it!”

That seems to keep him motivated for now.

He did the calendar again and then we read 3 books. He was actually the one who specified to me when I told him to get some books for me to read to him. He folded his thumb and pinky finger and showed the three fingers to me and said emphatically, “3 books!” to make sure I’d say yes and agree to finish reading them all. I nodded. 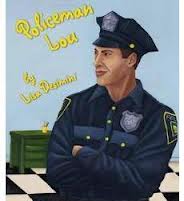 Then he did his math workbook again while I took a much needed nap. And like on the previous day, he continued working on his workbook on his own even afterwards, alhamdulillah.

While doing his calendar notebook, I directed him to write the numeral 9 properly. I guess he’s not really down on the ordinals yet. I’m thinking we might need to work on that separately. He’s also figured out how to write 3-digit numerals correctly now alhamdulillah. Alhamdulillah, he also does have enough sense to refer to the K4 writing number booklet I had printed from Confessions of a Homeschooler when he doesn’t know how to spell a number.

We did the Surf’s Up Subtraction file folder game today. He keeps thinking it’s addition, but after I keep pointing out that it’s ‘minus’, not ‘plus’, he got the idea. At first, we subtracted using fingers, but then I took out the Math U See Math Manipulatives and had him just ‘cover’ the subtracted amount and see what’s left showing. He liked using that and quickly got the hang of it even mentally for some of of the equations.

Then we did Umm Numaan’s Away We Go InshaaAllah packet, though because I had printed it a while ago, I didn’t remember how I was supposed to put them together. But we went over the Arabic for the vehicles and he did the puzzle. Again, I’m very bad at doing Arabic vocab for some reason. Even now, I don’t really feel enamored to learn or teach Arabic vocab per se even though I know that’s how you start. With Quran though, I’m all for it. I know. Strange.

We also read 3 books today, The Race, Curious George and the Pizza, and Mary and the Mouse, The Mouse and Mary.

When I was reading The Race, I asked him to tell me what words rhyme, and he had such a hard time doing it. The only aid he has in spotting them is when he reads the words. So I told him to close his eyes and I read the sentences again and again. He was able to tell me but still took a long time doing it. It sounds like he’s listening to all the words rather than listening for the intonation and rhyme scheme. I also asked him which would he rather be, like Hare, who got to have all those hair-raising (no pun intended) adventures, or like Tortoise, who chilled on the ship all the way. He said ‘Tortoise’. As for Mary Mouse, he asked me, “Why did they drop the spoon?”

He replied, “So they can wave at each other.”

For Curious George, he was a little confused in one part where George was delivering the pizza to the factory. He kept asking why that man was there. I had to explain to him again the concept of ordering pizza by phone. Not sure if he got it.

This MUS manipulatives are very useful. I love it. The only thing about it is that it is a little inconvenient to take, use, and put back.

From doing his Calendar Notebook everyday (almost everyday that is), we got on to correlating coin values and tens and ones. 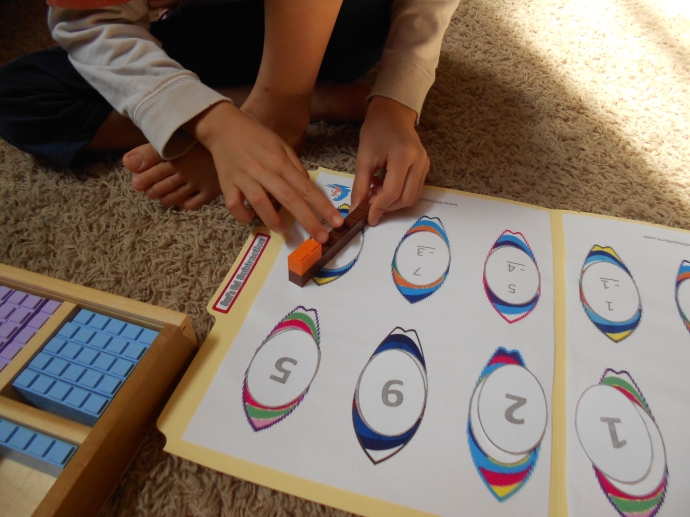 I was looking for Reading Rainbow videos for Z, and remembered that I had just read about Mezba’s Teaching Kids the Holy Quran using Legos website this morning in a Productive Muslim email. So I got that and thought I could use that to go over the meaning of the surah with Z. He LOVES it. He kept on browsing through it, going through surahs that are familiar to him, and asking me to explain it to him while he looked at the lego formations. I had to go to a doctor’s appointment and he was still going through it on his own, reading whatever he could. 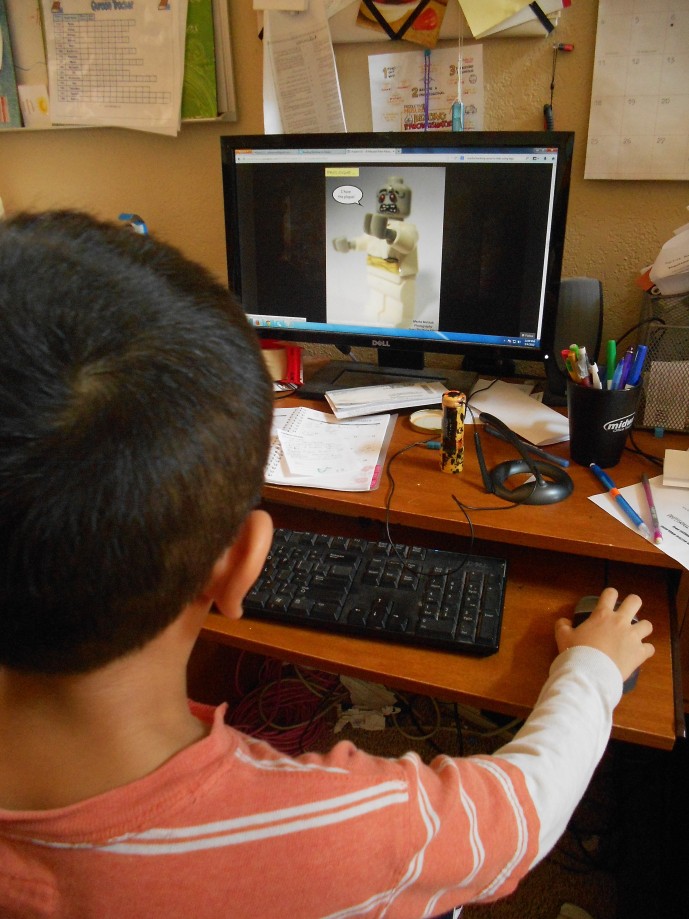 When I got back home though, he was watching Reading Rainbow. But I can tell he loves that Lego explanation of the surah. I even ended up telling him the story of Surah Yusuf until I said to him, “Z, that surah is a long one. Mama has to go now okay.”

I found this in the kids’ bathroom yesterday and am quite happy that H ended up making it for Z. I have yet to do this activity with Z however. These activities came from the book that we read, Junior Science Time.

You’re supposed to fill the top cup with water and time how long it takes for all that water to fill the bottom cup (holes are poked at the bottom of the 2 top cups). Then you and your child can do diffeernt things and see what activities take that amount of time to do. Teaches concept of time.

H did this one with Z. He timed how long it took for the water to fill the jar up to the first line and the subsequent lines. I have yet to use this contraption with Z though.

The older kids have started their Interior Decorating class and next week their schedule will start being more full when Bio and American History and Ancient Egypt starts inshaaAllah. I’m interested to see how the Bio will work out.

Calendar went faster today as he cooperated. We ended up cutting and gluing some of his file folder stuff that I had printed two weeks ago and I wasn’t too happy about this because that should be done in the weekend, but well, we did it. So we did some vowel activities, and addition and subtraction. And we also did place value activity using the newly assembled file folder games. 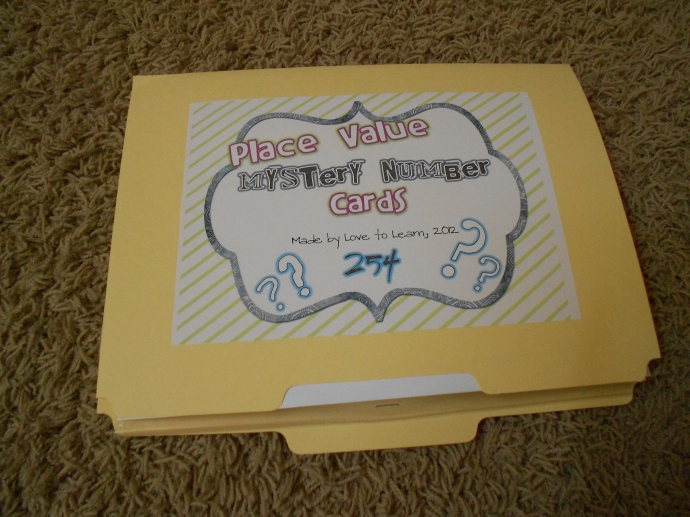 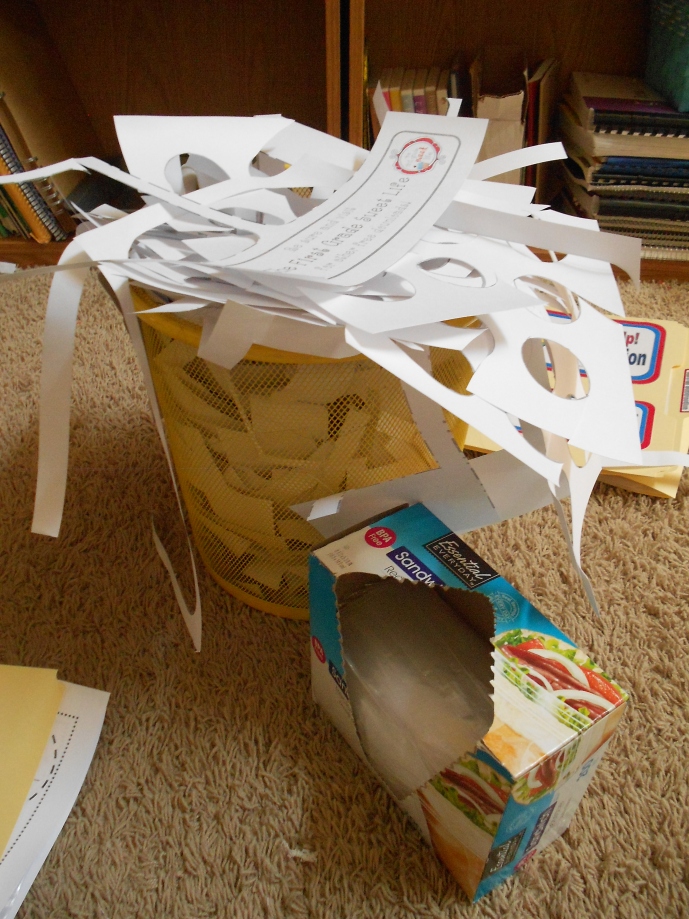 N started her therapy today, and S met with the horse therapy coordinator Sr on campus. Sr asked to see S first and talk to her to see how mature she is to see if she can volunteer with their program. Well, I think she passed the test though Sr did remark that S seems quiet and asked if she would be able to break out of her shell especially with the nature of the volunteer work. I came back with N after the therapy and left S at hubs’ office so he will drop her off at the club meeting they will have at 5:30 pm. Sr is very accommodating. I hope this works out well for them and for S.

For N, hopefully the therapy will help her in organizing a large amount of information, increasing in comprehension in literature readings, and extracting deeper analyses.

Z is working on his addition workbook as I am typing and seems very excited about it. He still seems to be having problems with discerning the vowel sounds.

I started walking in the mornings with S this morning and throughout our walk, she recited Al Kahf and I listened. We didn’t finish it though, stopped just before story of Zulkarnain. Z wanted to much to do his By Gum file folder game, so I did it with him and mashaaAllah, he actually got the hang of it. Though, in the middle, I did wonder if he’s concluding that as long as it has A in it, it means it has the Long A vowel sound. I made a mental note to do the Long and Short vowels so he is aware that there is a difference between the short and long vowel sounds. I also realized that when I break up the phonetic sounds in a word, he is better able to locate the vowel sound (duh!). He’s working on his Math workbook by himself without any push from me. He does need a lot of pushing with his Calendar Notebook though.

Today will be a busy day towards the end since I will have class and we have a full back to back schedule after Asr.

S just reminded me yesterday that I need to write down what stuff they need to work with Z on while I’m gone. One more thing on my to do list. I have to maybe print out more stuff for Z and pinpoint what areas he needs more work on that the kids can work with him with. I also need to clean up the plan for the youth girls halaqa that we just started last week (well, kind of) so that Wd can continue it while I’m gone with minimal problems. InshaaAllah.